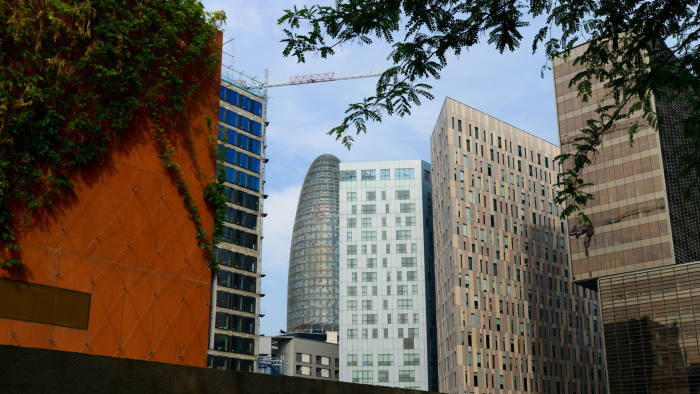 Despite the current political turmoil and a rollercoaster economic decade since the global financial crisis, Spain is seeing a growing influx of investment from abroad.

The country is among the top beneficiaries of a so-called “Brexit boost”. Investment into continental EU countries has risen since the UK referendum result in 2016 at the expense of foreign money coming into Britain.

Total estimated capital invested into the 27-member EU’s greenfield foreign direct investment (FDI) projects increased 43 per cent in the three years to the end of the first quarter of 2019, compared with the preceding three years, says FT-owned database fDi Markets. The UK suffered a 30 per cent drop in greenfield FDI during that time.

Greenfield FDI — tangible, on-the-ground investment bringing new or expanded physical facilities and headcount — into Spain has risen sharply. Inbound projects numbered 552 in 2018, compared with 299 in 2014, while announced or launched investment grew from $7bn to $18.5bn.

“The evolution of Spain’s attractiveness to foreign investors is a very striking case,” says María Jesús Fernández, executive director of Spanish government investment promotion agency ICEX. Spain, she says, has had “record capital inflows year after year”, against a background “in which foreign direct investment has been falling in the world”.

She adds: “This is a sustained and significant trend that indicates that Spain has aroused great interest in the international investment community.”

Yet more significant is the investment quality. Spain has attracted 43 headquarter operations already in 2019, compared with 14 in 2014. Investment in design, development and testing projects rose from $154m in 2014 to $1.1bn in 2018, with a tripling of project numbers.

Since 2014, a total of $2.6bn has been invested into these functions — along with $3.6bn in information technology and internet infrastructure and $246m in research and development.

Among most recent investments, Universal Robots, which develops industrial robots and operates as a subsidiary of US-based automation equipment suppliers Teradyne, has partnered with Danish company Mobile Industrial Robots (MiR) to open a 1,500 sq m robotics hub in Barcelona. The centre, in the city’s 22@ tech district — the formerly heavily industrialised area of Poblenou — is aimed at boosting innovation and will host a showroom of new developments.

Meanwhile, Free Now, a ride-hailing partnership between Daimler and BMW, has invested €30m in its innovation centre in Barcelona. Free Now’s 1,400 sq m location in the city centre’s Plaça de Catalunya has 100 workers and expects to hire 50 more by 2024.

In Madrid, US-based Nalej, a VC capital-backed platform-as-a-service company, has launched an innovation lab and Deloitte has opened an €18m cyber security centre. The latter will have 570 staff and offer services to markets in Europe, the Middle East and Africa.

Barcelona and Madrid are moving up the league tables of FDI destinations for innovative activity. A study of European cities for their suitability for investment in artificial intelligence, using fDi Benchmark (an assessment tool that compiles data on factors influencing investment decisions) ranks Barcelona and Madrid just behind London and Paris and ahead of Berlin, Milan and Frankfurt. The Spanish cities rank first and second, respectively, for cost and fourth and fifth on quality metrics.

The average developer salary in Spain (€40,000) is much lower than in France, Ireland, or world hubs London, New York and San Francisco, says Ms Fernández. Spain, she adds, has a higher tertiary education rate than the EU average.

Other areas of Spain are attracting innovation-led investment. Switzerland-based dental implant makers Straumann opened a global R&D centre this year in Mendaro, in the Basque Country, having acquired the local company Createch Medical in 2018.

Dublin-based professional services company Accenture plans to expand its flagship technology centre in Malaga, southern Spain. Its near-term goal is to create 300 jobs in the region.

Spain aims to become one of the world’s main innovation hubs, says Ms Fernández: “We truly believe it is just a matter of time.” That said, there is no shortage of contenders. Neighbouring Portugal is also making a strong case to be Iberia’s innovation centre and is enjoying an FDI boom.

Stiff competition is coming from around Europe and, indeed, much of the world for high-value-added tech investment. Success requires concerted efforts to keep education, science and research well funded, while cultivating the freewheeling, dynamic environment in which creativity thrives. Spain’s claim is that it has the right elements falling into place, and the FDI to show for it.